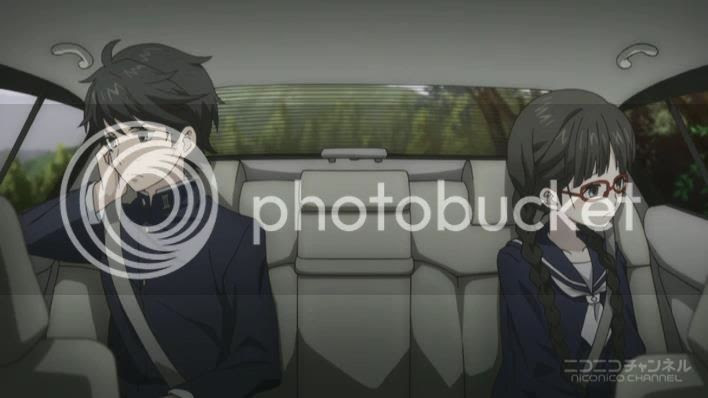 I didn't expect 2nd episode to be streamed on NicoNico Douga, so I was surprised when I found out that 2nd episode is out. But that's fine. Less agony waiting for me. :3


After events in last episode, the relationship between Miyuki and Izumiko is awkward. Neither of them is pleased with current situation (when Wamiya asks her if she hates Miyuki, Izumiko confirms this is, indeed, the truth), so Izumiko contacts her mother hoping that she would be able to solve the problem. Yukariko promises to meet the two of them and perhaps help. She gives Izumiko a new cell phone but poor girl can't use phones and when suggests Miyuki that he would do everything in her place, he gets annoyed at her. In the end it's decided that they go together but Miyuki takes the phone. Everything is going well? Not really. Before the plane taking everyone to class trip takes off, Izumiko sees Wamiya standing. This happened in previous episode as well and makes the guy even more suspicious. If that wasn't enough Izumiko starts seeing strange shadows in plane and then in Tokyo. After arriving Izumiko starts feeling sick and gets to listen to annoyed Miyuki doubting her sickness. The two of them separate from the class in order to meet Izumiko's mother. However, suddenly she sends message saying that she can't meet them and tells them to get to her house since it has barrier. She seems to be aware of the shadows Izumiko is seeing. When Izumiko gets tired of running, Miyuki finally does something nice - takes her hand! But this was definitely not their day as the cloudy day turned into rainy day. They take a shelter from rain but Izumiko once again sees a shadow. But this time it's approaching her and she gets really scared (not from thunder like Miyuki) but from that shadow. As much as Izumiko may dislike Miyuki, he was the only person next to her and I must applaud Izumiko for asking Miyuki's help even though she dislikes him. Her request to hold hands probably was a bit strange but Miyuki reached out his hand to her. And so, for a second time in this episode they held hands. :3 And then Miyuki protected Izumiko by chanting some spell to keep evil spirits away. But as I said this wasn't their day and when a shadow turned out to be Yukimasa, Miyuki snapped again. -_- So, yeah, poor Izumiko got yelled at again. Yukimasa explains that those shadows are after Izumiko and want her powers. Is he one of them? Maybe. Perhaps he's not directly after her powers but he definitely has something up his sleeve. The three of them safely reach Yukariko's house but she's not there. I kind of hoped to see her since she appears to be quite important character. But I'm fine with her not appearing as well because that makes her more mysterious. A character who doesn't physically appear influences everyone else and their actions? Hell yeah! But you know Izumiko is quite mysterious as well. Imagine mine (and Miyuki's) surprise when a she suddenly steps out of her room wearing kimono, hair loose and surrounded by some aura. She's not Izumiko but a goddess who took over her body (as the goddess herself says Izumiko is a vessel and I immediately remembered "vessel of the Holy Grail" from Fate/Zero & Fate/Stay Night). The goddess also tells Yukimasa that Izumiko is the last and that everything will end with her. Yukimasa is also asked to protect Izumiko and then the goddess leaves Izumiko's body. As the result, Yukimasa releases Miyuki telling him that he can go back to his old school if he wishes. But Miyuki wasn't happy with this conclusion. I hope that he will stay because he wants to protect from Yukimasa but he may also stay because he's curious. I man, some supernatural things are happening and it's perfectly natural that a 15 year old boy would want to investigate things further. Also, Yukimasa might have been using reverse psychology to keep Miyuki around without forcing him to do so. I guess next episode will answer this question.