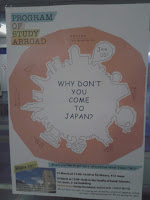 Two days ago I saw this poster (on the left). I got interested and yesterday went to library of my university to meet the students from Japan. They came here to promote their university (Tokyo Metropolitan University) since their university and out university has a contract. I wanted to learn more about how can I come to Japan but I guess I would need to ask around in my university. ^^' So, after presentation (which was about Japan, their language, culture and university) we had calligraphy workshop! We (the students and lecturers from our university) divided in three groups and we were shown how to write. Then somebody asked a Japanese lecturer to write his/her (I don't remember who was the person who asked) name. The lecturer did so and then everyone wanted. I got my name written in Japanese as well! Later we just kept asking how to write some words and tried to copy the writing. It was really really fun! I also got one Japanese magazine to take a look at. I picked the magazine in which some manga were being published. I don't remember which magazine that was but it may have been Shonen Jump since all manga were shounen (Bleach, Naruto, Sket Dance, Beelzebub Toriko and a few more I didn't recognize). It must have been quite a sight - me and some guy both were so focused on the magazine that a world outside it didn't exist for us. :D Actually, if I were to meet him again, I totally wouldn't recognize him because I was too busy looking at magazine. xD 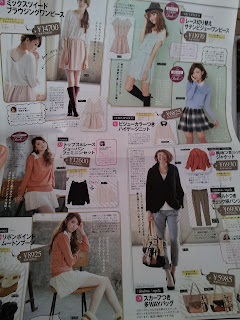 Today was the second day and the meting was held in my faculty and I had no lectures  at that time, so I went to meet the students from Japan again. Sadly I have no photos of us together but I hope that university page will add them. If not, I will totally ask for them. So, today was also divided in two parts. The first part was presentation and second was workshop! Presentation was almost the same as yesterday's with some minor changes. Since I was feeling braver today when they asked who wants to try saying their name in Japanese, I immediately raised my hand. I got a pair of beautiful chopsticks as a prize! Then we had a short break. My acquaintance said that I have Japanese accent. xD After the break we had origami workshop. My crane didn't turn out particulary great  but I am hopeless at things that need delicacy. ^^' On the table was lying a Japanese fashion magazine. I only took photos of extra from it but it was really interesting to find out how Japanese women & men (the magazine itself had a section for men as well) dress. What else? We tried some homemade sushi and I came to conclusion that I'm not really fond of it. I tried sushi a year or two ago and didn't like it. For eating sushi we all got a pair of simpler chopsticks which I found easier to use. I received a lesson from one of the Japanese lecturers how to properly hold and eat with chopsticks. And I also picked "Tokyo Handy Guide" in case I ever go Japan! Now that the event is over I feel really motivated to start learning Japanese! More photos available at Picasa/Google+ web album.