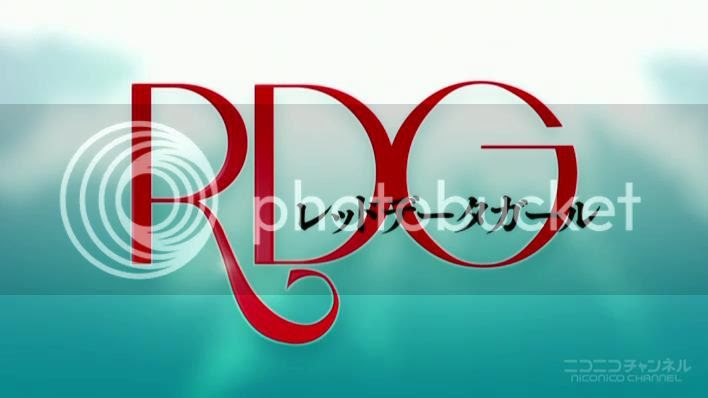 P.A. Works brings a new anime! Just like with KyoAni, I nowadays I tend to watch any new anime from this studio. Also, character designs are done by Mel Kishida who is responsible for Hanasaku Iroha characters' designs and the opening song is done by Annabel (who also sang Another and Sankarea EDs). But how is anime itself?
The episode starts with some beautiful sceneries and a shrine. Even though quality isn't great (since this is just a pre-air episode), you can see what this is P.A. Works' strength. Not really much happens in this episode but it clearly has potential to become something really interesting. Right before title screen (and beginning of opening) there was this special screen about Red Data Book and one line said "She is a girl from endangered species". I don't really understand what this means yet but our heroine Izumiko is clearly not a normal/ordinary girl. She lives in shrine with her grandparents and has trouble with modern technologies. Actually, it's not what she's stupid. Nope. Problem is what her touch causes all electronic devices to stop working. There's also something bout her hair. Izumiko wants to change, so she cut a bit of her bangs. It seemed a bit strange how everyone took notice of that but it turns out that her hair is her spiritual energy and that's why she she was little her mother (currently somewhere in Japan) put them in braids. Speaking of her parents, Izumiko's father is currently in America. He seems to be easy-going guy but insists that Izumiko must go to Tokyo after finishing junior high school. Izumiko herself wants to stay in local town. The only person who supports her wish to stay is Yukimasa Sagara. He is friend of Izumiko's father and now serves as her guardian. This should make him good guy, right? Well, while he does seem to care a lot of Izumiko's wishes he's not nice at all. In fact, I wouldn't be surprised if he had his own motives in helping her. Also, Yukimasa has a son Miyuki who is the same age as Izumiko. But they don't get at all.  Miyuki addresses his father by first name and makes it clear that Yukimasa was a bad father. Now Yukimasa forces Miyuki to transfer schools (and thus leave his home and friends behind) and become Izumiko's servant. Needless to say Miyuki wants none of this crap but gets beaten up (according to Yukimasa his son just fell  but not even Izumiko believes him) and accepts his fate. Oh and Miyuki hates Izumiko (she doesn't seem to like him either). Poor girl gets bullied in school by some kids (although she she has two nice friends and there's a mysterious Satoru Wamiya) and probably will get bullied by Miyuki as well. The two of them have met when they were little as well but even then she was bullied by him. But you know the opening gives a completely different image.  So, maybe at first they were friends but later something happened? Only time will tell. Also, opening shows that we will have romance, so this means that eventually Miyuki will warm up to Izumiko. I'm already shipping those two. >.< Anime summary says that a terrible accident happens (perhaps a suicide bird (reminds me of accident in Another OVA) seen in PV), so that will probably make Miyuki and Izumiko closer (at least hat's what I would do).
Overall, I liked the first episode and I will definitely continue watching it. A proper 1st episode will air on April 4th and second episode will air on April 11th, so waiting for new episode is going to be very painful. ;_; Especially because opening suggests that anime may become quite dark. So, I'm leaving you with a cute image of Red Data Girl ED. ^^