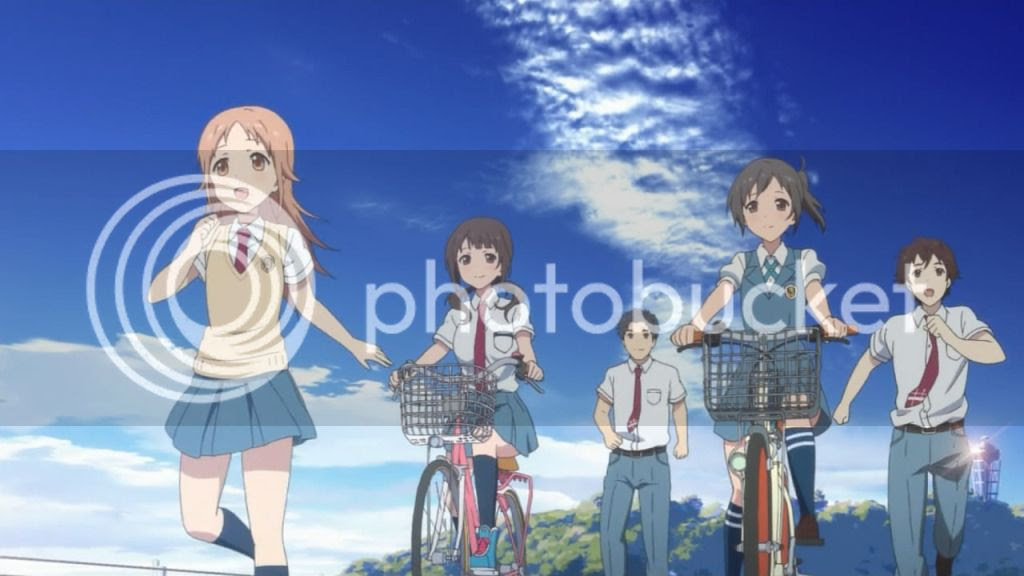 Since I am a big fan of P.A. Works, this anime was on my "must watch" list. And it certainly didn't disappoint!
First of all, there's a gorgeous art and equally beautiful animation. That's P.A. Works for you. When it comes to beautiful looks, you can always count on P.A. Works. Looks aside, how well does the studio fare with characters and story? It's original slice of life series and as often in this genre, it features cute girls. I must say that all three girls (Konatsu, Sawa and Wakana) look and act pretty much like Hanasaku Iroha girls did. Since I enjoyed HanaIro a lot, this isn't a problem to me. Despite the similarities, there a lot of differences. For example, Sawa loves riding. It's not everyday that you a horse in slice of life series. Also, Sawa is in archery club and apparently has a good sense of fashion. My favorite girl of the show. <3  Also, unlike HanaIro, Tari Tari has two boys as main characters along with already mentioned three girls. Taichi is the only badminton club member and because of his practices is always late for classes. He seems to be rather friendly guy. Wien is a new student. He has been living in Austria for 12 years before coming back to Japan. I really like that Tari Tari doesn't ignore language barrier. Wien speaks Japanese fluently but still has some trouble with finding right words. He is often reading books to get know Japanese culture better but books obviously can't tell everything. Which results in many funny moments. My favorite is Wien's introduction to new class. Probably the best introduction I have seen. Since nobody cares to explain poor guy that it's unnecessary to bow so often, he continues doing the same. :D
The plot is rather simple. Yet again we will have club in main picture. This time it's choir club. Konatsu wants to perform on stage but since she messed up during her previous year, she's not allowed. And thus she decides to make a new choir club of her own. So far it has two members - Konatsu herself and her friend Sawa. Wakana has refused but I'm more than sure that she will change her mind.

So, all the things considered this is currently my favorite show of this summer. Kokoro Connect and Sword Art Online have just aired in Japan, so subs will coming out either this evening or tomorrow morning. Until I see those two, Tari Tari remains my favorite.